The Fascinating History of Meirion Mill

The stunning peaks of Snowdonia provide the perfect backdrop to the village of Dinas Mawddwy and the old station yard of the Mawddwy Railway which is home to Meirion Mill. The unique and beautiful setting never fails to inspire our visitors but also to pique their curiosity. Both the village and the mill hint at a long and interesting history. But how did such a curious arrangement of buildings come to be constructed in the midst of this striking countryside? 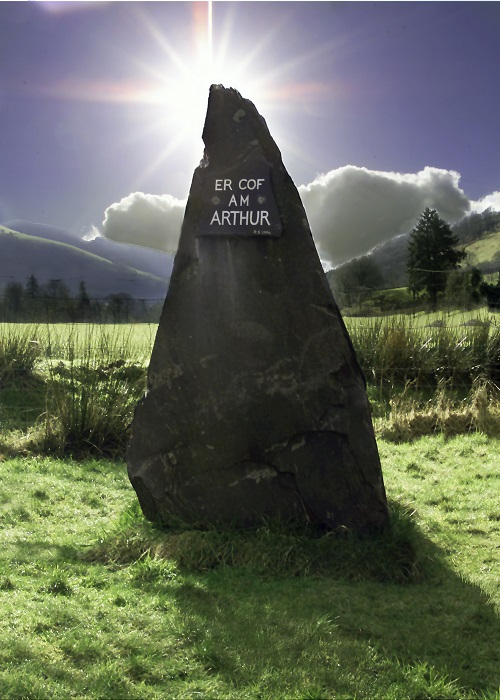 The Legend of King Arthur

So steeped in history is Dinas Mawddwy that is hard to know where to begin our story! Legend has it that at some point in the sixth century, King Arthur’s last battle was fought at Maes Camlan, just south of the village. The discovery of many ancient graves in the area and the local place names support this idea but the life of King Arthur remains shrouded in mystery. Arthur may have been killed during his final battle with his nephew Mordred. However, some historians believe that he was merely wounded and others doubt that King Arthur ever existed at all. We may never know the truth!

The Middle Ages and Beyond

Upon the division of the realm in 1293, the borough of Mawddwy was awarded to Owen de la Pole. It was the only remaining region of the ancient kingdom of Powys which was still ruled by the native royal family after 1309. Previously, the area had been the subject of constant fighting and disputes between the Kings of England and Llywelyn ap Gruffudd, Prince of Wales. The male line of the de la Pole family ended in 1414. However, Dinas Mawddwy was awarded its charter as seat of the borough of Mawddwy in 1394 and retained this status until 1886.

In the 16th century, the Mawddwy region was home to an infamous band of highway robbers and bandits named the Gwylliaid Cochion Mawddwy. The Red Bandits of Mawddwy, so called because of their red hair, supposedly travelled to the area after being excommunicated from their home towns following the Wars of the Roses.

The extreme violence of the Gwylliaid terrorised the district and in 1554, Sir John Wynn of Gwydir and Baron Lewis Owain, vice chamberlain of North Wales, were given a commission to put an end to their activities. Eighty men were captured and condemned to death. A revenge attack on Owain was launched in 1555 at Llidiart-y-Barwn (Baron's Gate). Owain was ambushed and killed but his death saw the full force of the law brought against the remaining Gwylliaid who were either executed or exiled to other areas.

The picturesque Pont Minllyn spans the Dyfi river adjacent to the Dinas Mawddwy station yard and the entrance to Meirion Mill. Also known as the Packhorse Bridge, it was built by Dr. John Davies, the rector of Mallwyd 1604 – 1644. Completed in the early 17th century, the bridge occupies a tranquil spot and boasts two stone arches. It isn’t possible to walk on the historic bridge but it remains a stunning and much photographed feature of the area. An Ancient Monument, the bridge was placed under the guardianship of CADW, the historic environment service of the Welsh Government by Mr & Mrs Street in 1979.

By the 19th century, Dinas Mawddwy was an important market town and agricultural centre. But this was the time of the Industrial Revolution which brought with it improved communications and the railways. The town lacked a railway and its position was under challenge from market towns with superior transport links. Dinas Mawddwy’s quarries and mines had never flourished and now found themselves being undercut by companies in neighbouring areas where transport issues had been mastered. 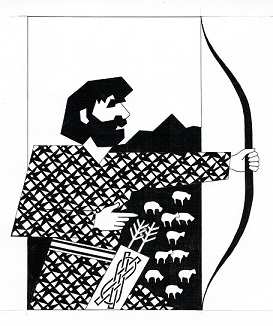 In 1856, the Manor of Mawddwy passed to Edmund Buckley, the son of a prominent Manchester businessman who had purchased the estate for him. Edmund was a young man who possessed great wealth and the imagination to do something with it. He resolved to transform Dinas Mawddwy into a garden city. However, he decided to make Bryn Hall his residence rather than the Manor House which he pulled down in 1864. In its place, he built a fine mansion, Plas Dinas, overlooking the Dovey and Cerist Rivers. Edmund then resolved that the town should benefit from a railway and engaged the services of George Owen of Oswestry to build it. The Mawddwy Railway officially opened in 1868 and ran for seven miles after which it connected to the Cambrian Railway.

An Era of Prosperity

Edmund Buckley was elevated to the baronetage of Great Britain in 1868. He was at the height of his power and set about his transformation of Dinas Mawddwy. A new road above the town was built, drainage problems addressed and an extension to Minllyn School constructed. A new hotel, the Buckley Arms, was also erected.

The railway had inspired new investment in quarrying and mining in the area. Sir Edmund himself established the Hendreddu Slate and Slab company. He let the hillside above the railway station to the Merioneth Slate and Slab Company and the finished slate was stored in a warehouse in the station yard. This was the warehouse which is now Meirion Mill.

A Turn for the Worse

Sadly, the Merioneth Slate and Slab Company ran into financial difficulties and eventually went into liquidation. Its assets were purchased by the Carlyle Slate and Slab Company. To make matters worse, in 1876, Sir Edmund Buckley filed a petition for the liquidation of his affairs. Edmund’s finances had been drained by the cost of running the Welsh estates he had purchased in an attempt to match the holdings of the most powerful Welsh landowners.

It took three years to sort out Edmund’s financial affairs and he temporarily moved to Manchester. The Buckleys eventually returned to Dinas Mawddwy but Edmund became a recluse. The family could no longer finance the Mawddwy Railway which gradually fell into disrepair. Sadly, the community suffered a further serious blow when the Carlyle Slate and Slab Company failed.

The quarry and surrounding land was then purchased by William Bullock, a Cheshire silk merchant. The business was run by his sons. They were later persuaded to support a scheme which enabled the railway to remain open but the railway company lacked the resources to maintain the infrastructure and equipment. Passenger services ceased in 1901 and the railway continued to deteriorate until it finally closed in 1908.

The Revival of the Railway

The Mawddwy Railway was to receive a reprieve. David Davies, the grandson of a famous railway contractor who was on the board of the Cambrian Railway, resolved to purchase the Buckley’s interest in the Mawddwy Railway. He managed to persuade his colleagues at the Cambrian to take on the reconstruction work and secured the required financial backing. Work started in 1910 shortly before Sir Edmund Buckley died.

The track was completely replaced and the engine shed at Dinas Mawddwy station rebuilt to half its original size. The line reopened 29 July 1911 but just when then town thought it could look forward to prosperous times, the First World War Intervened.

Most of the men in the area left to fight the war and the quarries closed. The Bullocks’ cutting shed became an ammunition store and their warehouse a saw mill. In 1917, Plas Dinas was destroyed by a Fire. When hostilities ceased, the government stopped using the munitions shed and the quarries did not reopen. The railway lost its war traffic and failed to attract new passengers. When the first motor omnibus arrived in Dinas Mawddwy in 1924, it sealed the fate of the railway. Passenger services ceased in 1930 and the line would have been closed for good had the nation not found itself at war once more.

During the Second World War, the station warehouse was used to store machinery belonging to the Rover Car Company. At the end of the hostilities, the country’s railways were nationalised, enabling the Mawddwy Railway to stagger on. But the bridge over the Dovey was damaged and confirmed the demise of the line which finally closed in 1951. 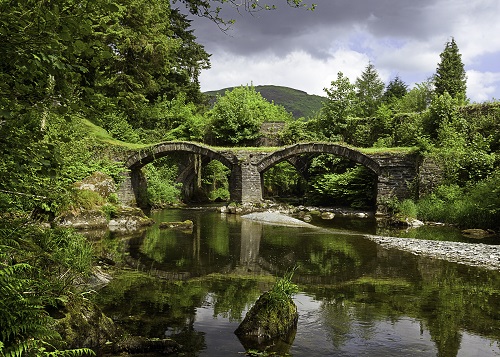 The area’s future looked rather bleak until a group of Merioneth farmers breathed new life into the town. They had decided to seek a location where they could spin and process their own wool and chose Dinas Mawddry. In 1947 they leased the buildings next to the station, including the warehouse, and installed their machinery. A year later they were able to purchase the buildings from the Buckleys, but numerous complications left the woollen mill in deep trouble.

The Welsh Agricultural Association were forced to step in to save the failing enterprise. It was losing money and should have been wound up but it was decided that operations at the mill would be scaled down in an attempt to save the project. However, the situation was hopeless and in 1963, the mill was leased to Turner Brothers, a Yorkshire firm who manufactured candlewick bedspreads. They proved to be successful in adapting their products to the modern market and offered to purchase the entire operation at Dinas Mawwdwy. Their offer was declined and in the light of the issues they were experiencing with local management, the Turners decided to leave.

A New Lease of Life

The lease of the Woollen Mill was advertised and piqued the interest of Cheshire industrialist Raymond Street who took over the premises in 1966. He was very keen to promote Welsh crafts and to preserve the station yard at Dinas Mawddry. Raymond Sreet landscaped the yard, improved access and converted the station house into a coffee shop.

Raymond Street invested a great deal of time and money into the mill and successfully expanded the business. He founded the Welsh Weavers Association and in 1973, organised the first Welsh Fair at Llandrindod Wells. The mill was renamed Meirion Mill and Raymond realised that there was an opportunity to establish it as a tourist attraction. By 1974 Meirion Mill was receiving 100,000 visitors, annually.

Raymond planned to open a railway museum to increase visitor numbers and this plan expanded to include a narrow-gauge railway. The new line opened in 1975 but operated for only two years as it struggled in the face of rising costs and high inflation.

Mr Street also rented space to local craft workers who could then sell their woven products and ceramics at Meirion Mill. By the 1980s the sale of woven products became the primary business at the mill which was to evolve into an impressive shop and tourist attraction offering woven items, crafts and homewares.

Meirion Mill is a monument to the endeavours of ambitious and determined entrepreneurs who each appreciated the beauty and potential of Dinas Mawddwy. The mill has survived huge economic upheaval, two World Wars and the demise of the railway whilst constantly evolving to meet the demands of the time. The grandeur and serenity of its setting has continued to inspire visitors and will always overshadow man’s contribution to Dinas Mawddwy.

We are very sorry, but the browser you are visting us with is outdated and not complient with our website security.

Please upgrade your browser to a modern secure version to view our website.